One of the lame gimmicks at the film's website is a series of "Great Moments In Spin" e-cards, including the following one: 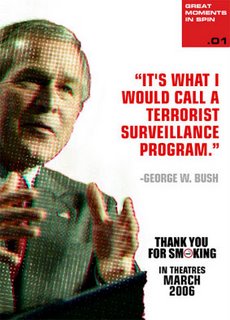 Certainly these are cynical uses of current events to promote a film rather than a sincere condemnation of Bush's high crimes, foreign and domestic. (And it worked, since I mentioned the film.) If anything, the campaign's disrespectful of the victims of Bush's crimes.

But it's certainly not an example of liberal Hollywood. The film's directed by the son of Ahnold apologist Ivan Reitman (making it an all-nepotism production). And the promoters include a Clinton gag card as well.

One might expect the Bush part of the ad campaign to be met with squeals of horror from the phony outrage pimps on the Fox News Channel, but the film's producer is Fox Searchlight. And with Ol' Dirty Buckley's ties to the project, Cousin Itt Bozell will be gagged as well. (I also see Dennis Miller's got a bit part "as himself," portraying an unfunny talk host.) Expect not a peep from the pimps.