Here's Skull and Bones Dana at his best(debatable, of course): 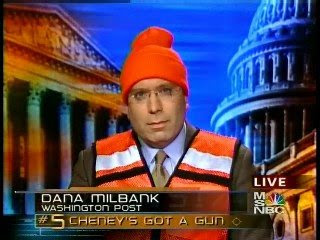 This is Dana Milbank at his worst, sounding like David Brooks:

Fresh from his presidential-style world tour, during which foreign leaders and American generals lined up to show him affection, Obama settled down to some presidential-style business in Washington yesterday. He ordered up a teleconference with the (current president’s) Treasury secretary, granted an audience to the Pakistani prime minister and had his staff arrange for the chairman of the Federal Reserve to give him a briefing. Then, he went up to Capitol Hill to be adored by House Democrats in a presidential-style pep rally.

Inside, according to a witness, he told the House members, "This is the moment . . . that the world is waiting for," adding: "I have become a symbol of the possibility of America returning to our best traditions."

BUT A DEMOCRATIC SOURCE SAYS: “His entire point of that riff was that the campaign IS NOT about him. [The Post] left out the important first half of the sentence, which was along the lines of: ‘It has become increasingly clear in my travel, the campaign, that the crowds, the enthusiasm, 200,000 people in Berlin, is not about me at all. It’s about America. I have just become a symbol … .”

Make Yale proud, Dana. Besides, fact-checking is so passe in modern journalism. It isn't his fault.
Posted by RonB at 8:18 AM