I have maintained for some time that Scott McLellan, although a shill for the White House, has the potential to be a whistleblower-not a significant one, but it's important to hear a renegade staffer confirm what we suspected:
On MSNBC’s Hardball last night, host Chris Matthews asked former White House Press Secretary Scott McClellan if he saw “FOX television as a tool” to get the White House’s “message out” while he was in the Bush administration. “Certainly there were commentators and other, pundits at FOX News, that were useful to the White House,” replied McClellan, adding that they were given “talking points.”

Making a distinction between journalists like Brit Hume and commentators like Sean Hannity and Bill O’Reilly, McClellan admitted that “certainly” the White House used Fox News talking heads as “spokespeople” with “a script”.

McClellan later told MSNBC’s Keith Olbermann that “it was done frequently, especially on high-profile issues” and that Fox often gave the White House “its desired results.” Current Press Secretary Dana Perino would only tell Olbermann, “I’m not aware of that.”

I mean, what's she going to say? "Hey-you got us. Any other gotchas out there?" What a load off that would be. She'd probably cry. 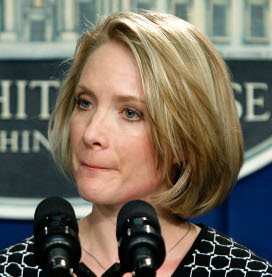