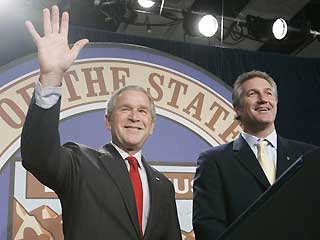 "Tell Alberto The Money's On Its Way... And There's More Where That Came From ... And Just Keep Grinning Like An Idiot"

Seems one of Saint John McCain's campaign co-chairs is about to spend a few years in the federal pen. The charges against U.S. Rep. Richard Renzi (R-AZ) include conspiracy, money laundering, embezzlement and bribe-taking, four of the Seven Republican Sins.

But surely this is all news to the Maverick, the man so pure he won't even fuck a lobbyist.

Renzi, 49, a burly former college football player and father of 12, was elected to Congress in 2002 in his first bid for office and narrowly won reelection in 2006, just days after news of the federal investigation broke. After a family business was raided by the FBI in April 2007, Renzi quit the three House committees on which he served. The race to replace him is underway.

Last year, Renzi also became involved in the controversy surrounding the Bush administration's firing of nine U.S. attorneys when his office acknowledged that his chief of staff called one of the federal prosecutors to ask about the status of the Renzi investigation.

The investigation broke just before the November 2006 election. And here's Saint John's benediction, circa October 2006 -- after the investigation was made public, according to CBS:

"This is Sen. John McCain. I'm calling to urge you to support my friend Rep. Rick Renzi for Congress. Rick has represented the first district of Arizona with tenacity, honesty and integrity beyond reproach. I work with Rick every day and can report to you his total dedication to the people of Arizona and the United States. Please join me in supporting rural Arizona's workhorse congressman on Nov. 7."

So Straight Talk knew Renzi was bent for over a year, but still made him a campaign co-chair. Perhaps McCain's outrage over the Jack Abramoff affair was all about the fact that Jack-Off wasn't one of his supporters.