Sharia Plain Seeks to Increase Her Base

Has the G.O.P. become a big tent party? 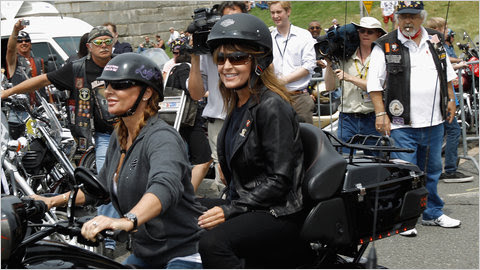 Rumor has it that Sharia Plain will launch her presidential campaign on June 22 at a public event in San Francisco.

Riders are considered a Dykes on Bikes® participant just by registering for the SF Pride Parade.

And by rumor, I mean something I just made up. Like Palin and her support for veterans. Dukakis looked more comfortable in that tank than does Palin trying to avoid direct physical contact with the woman operating that bike.

Ms. Palin climbed aboard a chopper, assisted by a member of the Rolling Thunder staff, but was unable to move because there were so many members of the press snapping photos. Organizers eventually brought in police, also on motorcycles, to clear a path.

After moving just a few feet, Ms. Palin got off the bike to sign autographs and talk with the crowd. At one point she could be heard discussing "the missing," a reference to the soldiers still missing in action — a key part of the Rolling Thunder cause.